Ticks are parasitic arachnids that live on the blood of mammals, birds, reptiles and amphibians. Ticks tend to flourish in warm, humid climates so that they can absorb moisture from the air to stay hydrated. They tend to hide in tall grasses, wood piles, leaf litter and low-lying vegetation, which provides cover from the sun. Prolonged exposure to the sun will dehydrate a tick, therefore you will rarely find one in the middle of a well-maintained lawn. Ticks find their meal by sensing body heat, odors, moisture, vibration and detecting animals’ breath. According to a recent CDC statement, the number of illnesses caused by tick bites tripled between 2004 and 2016.

We believe that landscape management combined with chemical control works best for eliminating ticks on your property. Our licensed technicians will inspect your property not only for the presence of ticks, but to point out “hotspots”, such as tall grass and weeds, low brush, groundcover in shaded areas, landscaped beds, rock walls, woodpiles and under porches and sheds. After a full inspection, we will make suggestions to help you make your yard less attractive to ticks and safer for your family.

Our team is currently performing Huntington tick spraying for a residential customer of ours!

All-Natural Tick Spray: Our trained technicians will treat your yard with our all-natural cedar-based solution that kills ticks on contact and repels them from entering your yard for up to a few weeks. Harmless to humans and pets the cedar-based liquid is deadly for ticks and their eggs.  Any tick that is directly sprayed should die within a few minutes.  Those that are not directly hit usually die shortly after due to the smell.

“TFM” Package: Our complete Tick, Flea, & Mosquito treatment package combines our two signature products to target a larger range of pests, including fleas, gnats, scales, aphids and beetles. This particular treatment enhances the knockdown and repellant effect on your property. For a longer residual effect, we will add an organic spreader sticker, per request. Our TFM treatment covers your entire property! Call us now at 631-939-9799 or 516-226-3811 for a FREE ESTIMATE!

Anaplasmosis
Anaplasmosis is most commonly spread by the bite of the blacklegged tick (Deer tick). People with Anaplasmosis will often have fever, headache, chills, and muscle aches. These symtpoms will often begin within one to two weeks of the initial bite. While there isn’t a vaccine, early treatment with antibiotics can help prevent severe illness, including respiratory failure, severe bleeding, organ failure or even death. Although cases of anaplasmosis can occur during any month of the year, a majority of cases are reported to happen during the months of June and July, coinciding with the  nymphal blacklegged ticks season in which they are most active. Ticks can be active year-round, but they are most active during warmer months (April-September).

Babesiosis
Babesiosis is a potentially severe, and at times, fatal tick-borne disease caused by an infection with a red blood cell parasite. Babesiosis is most commonly transmitted to humans by the bite of an infected blacklegged tick (Deer tick). Typically, a nymph tick becomes infected after feeding on a mouse, and then transmits it to its next blood meal. Common symptoms include fatigue, weakness, malaise, sweating, chills and loss of appetite. Many healthy people do not develop symptoms at all. If left untreated, severe side effects can occur, including death. Thankfully, there are many treatments available.

Ehrlichiosis is most frequently caused from a bite from an infected Lone Star Tick, though it can also be transmitted by dog ticks or deer ticks. Lone star ticks are common throughout the Southeastern and South Central United States, as well as the East Coast. The females have a white spot on their back. Symptoms of Ehrliciosis mirror symptoms of a stomach flu. Prompt treatment of ehrlichiosis is essential to avoid severe complications. Most people will recover with the antibiotic treatment. Doxycycline is the treatment of choice for adults and children of all ages with ehrlichiosis.

While there are numerous tick-borne illnesses, Lyme disease is the most common and well known. Lyme disease is transmitted through the bite of an infected blacklegged tick (Deer Tick). Those living in the Northeastern U.S., Midwestern U.S. and along the Pacific coast are the most at risk. The CDC estimates that in 2018, approximately 3500 people were diagnosed with Lyme Disease in New York. Typical symptoms include a “bulls eye rash”, fever, headache and fatigue. If left untreated, Lyme Disease can spread to the joints, the heart and nervous system. If caught early, most cases of Lyme disease can be treated successfully with a few weeks of antibiotics.

Rocky Mountain Spotted Fever (RMSF) is a serioius tick-borne illness that can be deadly if not treated early. RMSF is spread by the bite of three different ticks, including the American Dog Tick, Rocky Mountain Wood Tick and the Brown Dog Tick. RMSF affects over 2,000 people a year in the United States, and usually occurs from April until September. Symptoms include a fever, upset stomach, and a rash. While  RMSF can be transmitted in New York, it is most commonly found in North Carolina, Missouri, Tennessee, Arkansas, and Oklahoma. Rocky Mountain Spotted Fever can be treated with Doxycycline.

Tularemia
Tularemia is a disease that infects animals and humans. People can come infected in several ways, including from a tick bite. Rabbits, hares, and rodents are especially susceptible and often die in large numbers during outbreaks. Signs and symptoms vary depending on how the bacteria entered the body. Tularemia can be life-threatening, but most infections can be treated successfully with antibiotics. 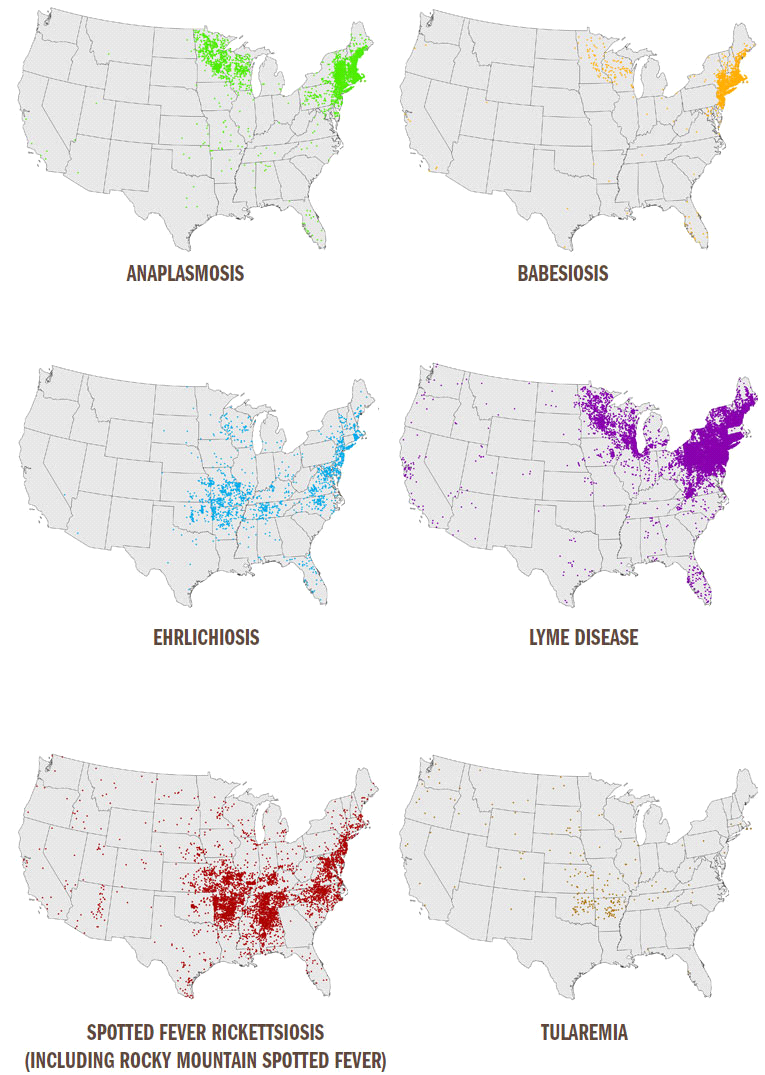